For example in our previously described two node system consisting of a single pipe section, let’s assume that we know that the inlet flow at the upstream node is 50 mmscfd.

The 50 mmscfd is a boundary condition. It can be used to find an unknown value in the sense that we now know that the outlet flow at node #2 must be -50 mmscfd.

This way of looking at it is handy for a person, but it is not necessarily the way a simulation program would see it. In fact many simulation programs do not treat the leg flow as a primary variable. Instead it is absorbed into the equations and never really shows up during the primary solution of the system.

Thus the simulation program, after making substitutions could make the direct correlation: since the flow coming into node #1 is 50 then it follows that the flow leaving node #2 is 50.

If we were to let a simulation program solve this system, we would specify the InFlow at node #1 as +50 mmscfd and then say that the outlet flow at node #2 is unknown. Obviously, this is such a simple problem that you don’t need a program to solve it for you, but what if you had a 100 node system and you knew what the inlet/outlet InFlows were at 99 of those nodes. The program would solve for the flow at the 100th node using the same principle that was used in the 2 node problem above. It would add up the flows from the known 99 nodes and then say that the negative value of the result is the in/out InFlow at the 100th node.

The principle used here is that the total InFlow going into a system must be equal to the total InFlow going out of the system. Since the InFlows going out of a system are represented with negative numbers, they will cancel any InFlows coming into the system (positive numbers), thus the principle can be restated as: the sum of all InFlows into a system must equal zero.

This same principle can and is used by simulation programs to solve for flow balances at nodes. For example, let’s say we have three pipe sections that are hooked together at a node. Let’s also assume that there is a flow going out of the node as a delivery. 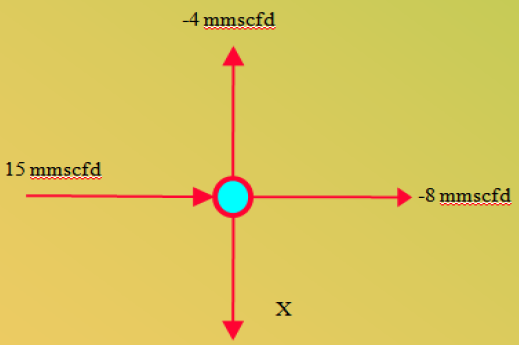 Let’s assume that one pipe section is feeding 15 mmscfd into the node and that flow is leaving the node into the two other pipe sections at the rates of 4 and 8 mmscfd respectively. We can now use the same flow balancing principle to solve for the delivery flow leaving the system. The equation would look like:

This equation essentially says that the sum of all flows going into the node must equal zero. Since two of the pipe flows coming into the node are actually leaving the node, they are represented as negative numbers.

The delivery flow is represented by x. From the equation, we can calculate that x = -3. Since the flow is negative, we know that it is a delivery. Had it been a positive number, it would have been an input into the system.

There is another method for balancing flows in a system, that uses loop flow balancing rather than node flow balancing but we will not cover it here. The node balancing method is a little easier to visualize and tends to be the preferred method.

Now let’s look at pressures as boundary conditions. With the majority of pipeline simulation programs, when you specify a pressure, you are referring to a node pressure. Looking at our single pipe section again, let’s say that we know that the pressure at the upstream end of the pipe is 300 psig.

This constitutes a boundary condition since we can now solve for the downstream pressure using the general flow formula.

If we were to now enter the system configuration data and the boundary conditions into a file format for a simulation program, it might look like the following:

The above file contains all of the necessary information needed to run the system. If you had a simulation program that accepted the above format, you could plug in the data and then run it. The program would solve for the unknown InFlow at node #2 (that’s an easy one) and for the unknown pressure at node #2 (not so easy).

In this case both of the node InFlows are unknown. There are still two unknowns which is the correct number for a two node system. You can calculate the flow rate going thru the leg using the general flow formula and then use the node flow balance equations to find the in/out InFlows at nodes 1 and 2 (a fairly easy procedure in a simple system like this one).

With simple two node systems, setting boundary conditions is simple. With more complex systems however, you can run into problems, because just having the number of unknowns equal to the number of nodes is not the only prerequisite needed for a successful simulation run.

You must set up the knowns and unknowns in such a manner that the solution is possible.

This is probably the area that gives most people trouble. In a large and complex system, even experienced users can (and do) run into problems by setting the knowns and unknowns up so that the system is “inconsistent”. What exactly does this mean? Let’s look at the system shown below and assume that it is a steady state system (not changing with time).

What if we had set the downstream node flow to 50 instead of 75? This would still constitute a bad set up, not because the node flows contradict each other (they don’t), but because they could.

Furthermore, they still don’t contribute anything towards our ability to solve for the two unknown pressures. Even if we could assume that the flow rate through the leg is 50, we don’t know what the pressure level is.

There are no hard and fast rules that you can use to avoid running into the problem of an “inconsistent” system, although with experience, it happens less often.

In simple systems, you can usually track down the bad boundary conditions; without too much trouble by using logic (if I know this value I can calculate this value which in turn let’s me calculate this other value, and so on, all the way through the system until you find the contradiction).

In very large and complex systems however, it sometimes comes down to just changing the boundary conditions by trial and error until you obtain a successful run. While this is certainly not the recommended procedure, you will undoubtedly find yourself using it every once in a while.

Simulation programs that encounter the above problem of inconsistency will typically exit with an error message saying that no pivot element was found, that the pivot element is zero, or that an unexpected row or column of zeroes was encountered.

The easiest way to avoid inconsistencies and set up the boundary conditions correctly, is to model the system in exactly the same way that the pipeline is operated in real life.

This usually means setting a Known value at all control legs such as compressor stations and regulators, setting all InFlows to Known, with the exception of at least one node which must have a Known Pressure and Unknown InFlow.

This is not absolutely necessary for steady state modeling, and once you become experienced, you can start to change the boundary conditions to solve for specific values that would normally be Known, but keep in mind that this only applies to steady state.

For transient modeling, you must follow the above rules or you will get incorrect results.

So far the examples we have looked at have only involved pipe sections, and the knowns or unknowns were either node InFlow or node pressure.

In the Gregg Products compressors are added in a system just like pipe sections. They must have an upstream node and a downstream node.

The compressor is treated just like any other leg except that the equations governing it are different: they involve pressure rises rather than pressure drops and include a horsepower variable.

Now let’s look at an example:

In this case the compressor station horsepower is unknown. If we used a simulation program, we would be asking it to calculate what horsepower would be required to compress 50 mmscfd from 200 psig to 300 psig. As you can see, there are still the proper number of unknowns (2 unknowns for a 2 node system).

With simple open/closed valves or check valves, there are no additional boundary conditions to worry about.

The concepts are no different than those involved with compressors and pipes, so we won’t go over the details.